Member Alert! We are actively monitoring the progress of Hurricane Ian. For details on local branch status, please visit our Member Alerts page.

charity of
the month

Radiant’s Charity of the Month program donates $1,000 each month to a charity nominated by you and receiving the most votes for a given month. Nominations of charitable organizations and voting for the monthly winner is all performed through Radiant’s Facebook site.

In addition to the winning charity each month, the person who nominated the winning charity will receive $100 – which the winner is free to keep for themselves or donate to the charity they nominated. It’s a win-win opportunity for you and your favorite local charity. Simply follow the easy steps below. Program and contest official rules are provided here. 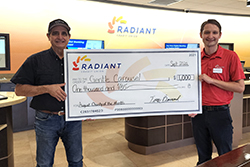 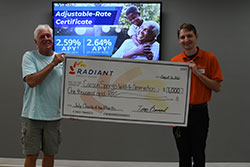 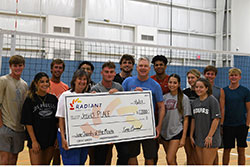 How To Nominate & Vote

Nominating and voting for our Charity of the Month is performed through Radiant’s Facebook page. Here’s how you get started:

Be sure to follow our voting rules to maintain the eligibility of your favorite charity to win. The voting rules include:

For The Winning Charity

Once the winning charity is selected for the previous calendar month, Radiant will contact a representative of the charity to finalize the prize donation. This process will include:

The Charity of the Month program resets the nominated charities and voting each month to begin again. Thus, each contest period ends at 11:59pm on the last day of each calendar month. Radiant reserves the option to begin the next monthly contest on the first business day of the month should the first day of the month occur on a holiday.

We love that you’ve participated, and we want to tell everyone about it, so we need the following Release of Claims:

Our members are talking

...I highly recommend Radiant Credit Union as they also support the community.

Not a member? Join Today!

Drop your bank and enjoy the benefits of ownership. It's easy.